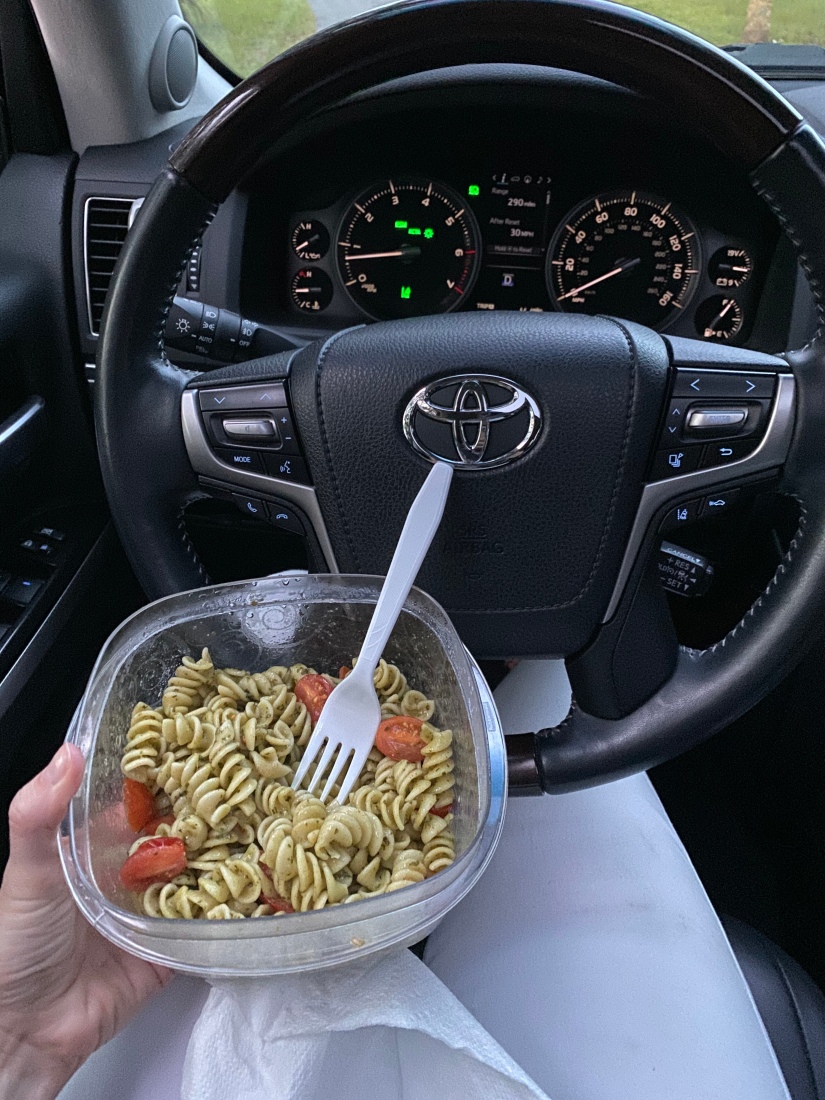 This picture tells you all you need to know about our current state of affairs. I’m eating a pasta dinner out of a Tupperware off a plastic fork behind the wheel of my car. See, I’m in a rush to get to the next activity pickup, but I’m also perilously close to starvation.

This is where we are, folks. It’s halftime.

We’ve had these (not so) little girls about half the time we will have them in our grasp, give or take. We’re in that weird time warp between threenagers and teenagers where we don’t have to pack Goldfish for church anymore, but we do have to remind them to put on deodorant in the morning and there is SO MUCH SHIT TO DO.

Remember when they were toddlers and you would ask yourself, “hmmmm…what can we do to fill the time between nap and dinner today?”

This is the middle season of parenting; the season of mad chaos. It’s the age of afternoon over-scheduling and blurring days. I’m not going to bore you with the details of my weekly M-ubering schedule (what I will tell you is that I’m on a first name basis with the service guy at the car dealership), but ‘tis the season of rushing and sports and lessons and homework and orthodontist appointments and driving and dinner on the go. And doing it all over again, almost every day.

Come to think of it, this halftime closely resembles a Super Bowl halftime show. It’s chaotic, yet carefully synchronized. It takes a lot of strategic planning. The stars of the show don’t do much besides show up for the applause and sometimes complain about the temperature of their Fiji water. The real magic happens behind the scenes and is left to the show’s executive producer who, coincidentally, also serves as stage hand, stylist, craft services manager, chauffeur, logistics coordinator, time keeper, schedule maker and travel booker. Spoiler: it’s me. Another spoiler: I’m raggedy as Ann and it’s only October.

Some of this halftime (shit) show is a Katy Perry shark dancing train wreck, and there are too many wardrobe malfunctions to count (sometimes in a pinch, you Febreze that dirty jersey or make her wear the rubber-bottom trampoline park socks from the back of the car to practice). But, as they say, the show must go on. We pack the next uniform and snack and move to the next thing.

Halftime is short, I know. There is a lot to cram into a limited amount of time. We only get a small window to put on the show of a lifetime. We’re supposed to cherish it, but sometimes it’s just too tiring.

When the halftime show is over—in the blink of an eye I’m told—the lights will go down and my production skills will be obsolete, no longer necessary. When the third quarter begins, I suspect I will be well-rested and calm(ish). But also a little sad and bored.

So, I will try to weather the madness of our halftime with appreciation, knowing that the time will surely come when I wistfully long to go back to the chaotic, exhausting days when my girls were young, and I ate pasta dinners out of a Tupperware off a plastic fork behind the wheel of my car.

This is where we are, folks. It’s halftime.

View all posts by suepermom